Home » Projectors » ANSI Lumens Vs Lumens: What Is The Difference?

ANSI Lumens Vs Lumens: What Is The Difference? There are many specifications to consider when purchasing a video projection system. Specifications can be confusing to newcomers when selecting a system, particularly when it comes to projection brightness.

Related Article: DVI-I vs DVI-D: What Is The Difference? 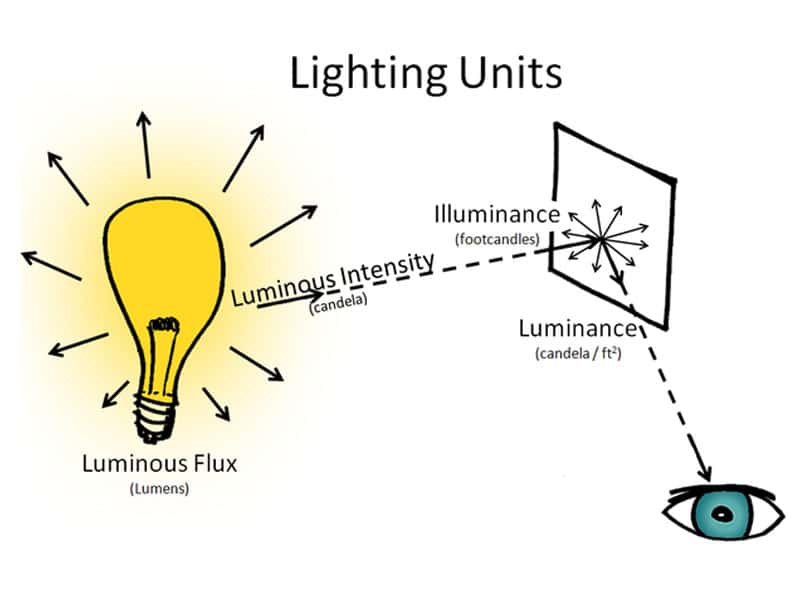 A Lumen is the standard unit of luminal flux (a.k.a. brightness) used in physics to describe the light output of a light source. Although a lumen describes visible electromagnetic emanation, it is not an absolute, but a relative measure that is subjectively assessed based on the light sensitivity of the human eye.

Lumen measurements, therefore, follow a weighted luminosity model that is based on human light perception. The human eye is sensitive to three wavelength ranges of light, each corresponding to the peak reception of retinal photopsin pigments: red (R: 560 nm), green (G: 530 nm), and blue (B: 430 nm). This is the basis for RGB-based color video systems.

The brightness of a source (illumination, measured in lux) on a target is dependent on distance and follows the inverse-square law. Think of target brightness intensity being spread out over a larger and larger area the further away the target is from the light source.

This reduction in intensity diminishes by 1/distance2. For this reason, the luminal output needs to be appropriate for the projection distance for proper contrast.

There are lumens, and then there are ANSI lumens. Many projection systems will report ANSI lumens to describe product brightness. These values are still lumens, just standardized measures of lumens.

The American National Standards Institute (ANSI) established a common, standard-referenced means of measuring light source brightness in 1992 (superseded by ANSI IT7.227 in 1998). Despite being accepted as the industry standard, other brightness measures are often reported for product marketing purposes.

Brightness measurements by the ANSI standard are performed as follows. In a temperature-controlled room (25°C) without other light sources, a test projector is set up to project a focused beam on a standard, matte screen (1.0 Lambert). Reflected or refracted light should be less than 1% total light on the screen.

The test projector is permitted to temperature-stabilize for 15 minutes. Optimal projection dimensions for the device should be used (16:9).

The projected image consists of a white field with six small, white blocks (each only 5% of the total view area) arranged in two parallel rows across the center of the view field. The first row consists of a 0%, a 5%, and a 10% white block.

Brightness and contrast are then adjusted iteratively until both conditions are fulfilled. When these conditions are stable, the image is replaced with a full white field and brightness measurements are taken at 9 fixed points in the field using a photometer.

These points form a 3 x 3 checkerboard pattern and are then averaged to express a mean lumen rating for the projection system.

The ANSI standard brightness assessment method is subjective and based upon the optical response properties of the human eye. As a subjective measure, it can also be used to calibrate video projection systems for optimal viewing under fixed ambient light conditions.

This method also prevents a projector from being overdriven and allows for optimal contrast ratio (the projector ratio between its full white and its full black) for the best projection image quality.

Only consider ANSI Lumens for Brightness In the video projection system market, it is literally the wild west, and anything goes regarding product descriptions. Remember, it is all about making the sale, so manufacturers or marketers will selectively choose different specifications, as well as fail to mention other specifications, to make their product more appealing to buyers.

Buyers are presented with lumens, LED lumens, “marketing” lumens, “Chinese” lumens, in addition to ANSI lumens. Since ANSI lumens are an industry standard, all measures reported are standardized by a baseline set of criteria. Therefore, projection systems may be directly compared for brightness based on ANSI lumen output.

Marked differences in the projector sale price which do not appear to correlate well with reported ANSI lumen brightness are often noted by consumers. These differences are based on differences in technology and manufacturing cost.

Bear in mind, ANSI brightness is only a measure of brightness, not picture quality. Other factors such as contrast ratio and peak output in RGB ranges also strongly contribute to apparent brightness.

When peak light outputs in red, green, and blue ranges corresponding to the spectrum of the human eye are higher for a lower ANSI lumen intensity projector, the overall brightness can appear to be as bright as another, brighter projector. This is known as the Helmholtz-Kohlrausch Effect.

Remember, the picture quality is subjective and all about perception. ANSI lumen measurements are only a standardized means of comparing brightness between projectors.

Consider other specifications as well when selecting a video projection system, such as projector-type, contrast ratio, pixel density, and color reproduction.